After the temple stay we returned to Gyeongju, but it was raining heavily so I missed all the historical sights and headed back to Seoul where I knew I could hang out with some awesome people, and I was not disappointed. I met up again with Seunghee and she showed me the milder side of Korean nightlife. And there I committed yet another faux pas. There are very strict (and incredibly complex) drinking rules about who fills up whose glass, and you NEVER fill your own glass. Well, another lesson learnt. 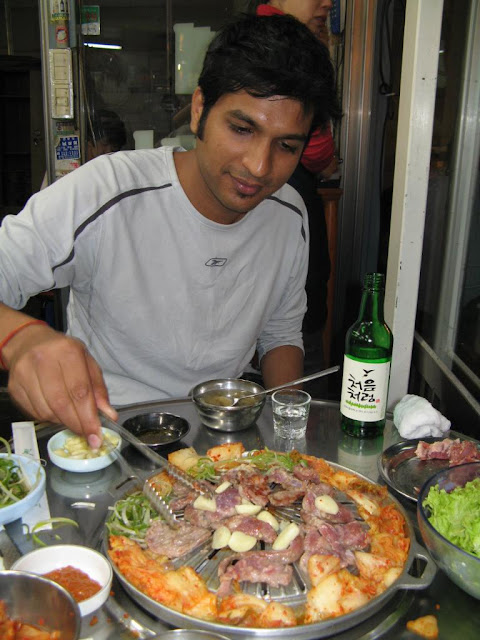 After spending half the next day at the Korean War Museum I met another CSer called Hailey, and she took me for some excellent Korean Barbecue (the cook ’em yourself kind), had lots of Soju and a great time.

After that I met up with Seunghee and a Japanese-German guy called Goro (yes, I did make the obligatory Mortal Kombat joke) and went for some Karaoke and more late night drinks.

The border between the Republic of Korea (South Korea)  and the hermit  Democratic People’s Republic of Korea (North Korea) is not too far from Seoul. The De-Militarized Zone (DMZ) has become a tourist attraction where people can walk into one of the rooms where the tables are positioned in such a way that half the chairs are in North Korea and the other half in the South. These rooms are where meetings between the officials of the two countries are held when tourists are not around.

I really wanted to do the DMZ Pamunjeom tour (there is no independent tourism here) but for Indians, they required special clearance that would take several days. 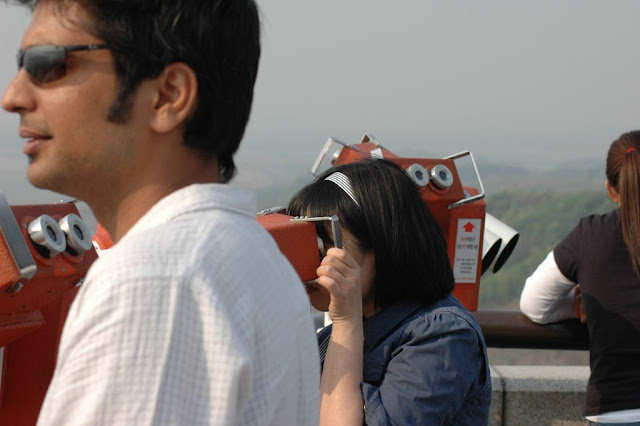 The next best thing is the Odusan observatory, where one can check out various exhibits that give a glimpse of life in the DPRK, and stare through high powered binoculars at the literally lifeless border towns in the North. After flirting with the enemy we made our way back to Seoul, and since I had an early morning flight we decided to forgo sleep and sampled the legendary Seoul Nightlife, in clubs such as “Noise Basement”. The name pretty much describes what it was.